With the following post, I’m going to start a tutorial about how to use enc28j60 Ethernet controller with Arduino.

Arduino’s official Ethernet shield is based on Wiznet W5100 microchip and Ethernet libraries in Arduino’s IDE also works for that chip: http://arduino.cc/en/Reference/Ethernet

A widely used Ethernet controller is Microchip’s enc28j60: in Internet you can find shields or breakout boards for that chip, usually cheaper than the official one. 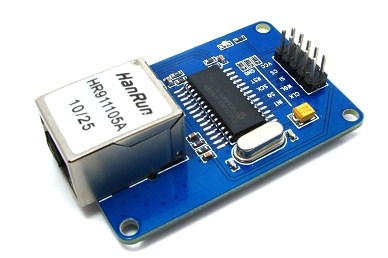 Testato correctly suggested me to add a note about the differences between the two controller: the main differece, that surely was the reason why Arduino team chose W5100 chip, is that this controller implements in hardware all the TCP/IP stack, saving MCU resources.

Some companies and hobbists developed Arduino libraries for Microchip’s controller; I’m going to use for these tutorials the EtherCard library by JeeLabs Café.

JeeLabs published its library on GitHub; first download the latest version in a ZIP file:

Open the main folder where Arduino’s IDE is installed (usually C:\arduino-1.0) and decompress the downloaded file into libraries subfolder. In ZIP archive, all the library files are in a folder named “jcw-ethercard-xxx“: rename that folder EtherCard:

Run IDE and check if the library is available:

Before connecting Ethernet shield to the net, you need some parameters:

You need to choose a MAC address not alredy used in your network… in the examples we usually choose MAC addresses with a not already assigned organization code (es. DD-DD-DD).

IP parameters (address, subnet, gateway) have to be consistent with the ones configured to other devices in your local network: an unique IP address and the same subnet mask and gateway.

Sometimes a DHCP server is available, that automatically configures new devices in the network: in a next example I’m going to show how to use this with Arduino.

In the netxt page, you’ll write your first network sketch…