In the following post, I’m going to show you how to power on a PC using the Wake on Lan feature and your Arduino.
Almost all the actual network adapters have a feature called Wake on Lan, that is the ability to “wake” the PC with a special command sent through the network.

Two main requirements to use this feature: 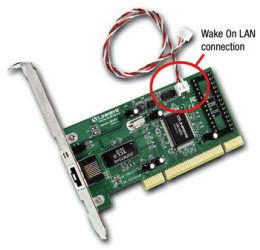 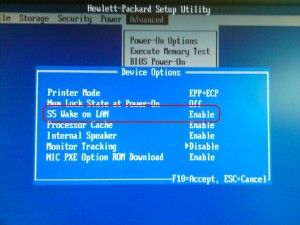 A typical limit in WOL usage is that network adapter isn’t able to wake the PC if it was shut down by power loss. Actually, recent motherboards can enable WOL functionality even after a power loss; you can configure this feature in motherboard’s BIOS: 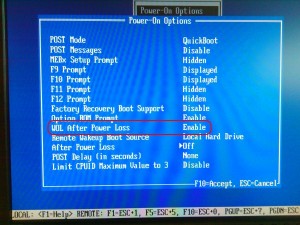 The wake command is issued sending on the network a specific packet, called Magic Packet. This packet is receved by all the devices connected to local network because it presents – as destination MAC address – the broadcast address (FF:FF:FF:FF:FF:FF). It includes six bytes valued FF, followed by the target PC’s MAC address repeated 16 times.

Even if it’s not important which high level protocols you choose, it’s a convention to use UDP protocol and destionation port 7 or 9.

[highlight color=”yellow”]Note: EtherCard library had a bug in the Magic Packet creation. I solved the problem and my change has been accepted in the official repository: so make sure to download library’s latest version[/highlight]

You can use sendWol() method to send the Magic Packet; that method needs target PC’s MAC address as a parameter:

As usual, you can find a complete example in the GitHub repository related to this tutorial.

Using a network analysis tool like Wireshark, you can inspect the packet sent by Arduino and note that it’s correct:

How to flash Arduino from SD card

Nice work. Next would be interfacing an GPRS shield with the same Arduino so that remote wakeup can be achieved. Of course after PC powers on, we can use it and access files remotely using remote desktop software.

Thanks Arup! It’s a good idea, a GSM shield has just been shipped to my home 😉 Stay tuned for a new blog post about it!

no, it won’t work because W5100 chip is very different from ENC28J60… as it is the chip chosen for the “official” ethernet shield, you can find a lot of documentation on Playground.

it seems WZ5100 does not supporto WOL functionality…
I found an article from Wiznet official blog about W5200 that adds WOL:

thank you very much for correcting the library. I tried to fix it also, it is more useful now! Work fine with ENC2860 connected to Arduino. WOL ok for me. Thank’s again !

when i try to upload i get a ethernet not declared message.. and nu upload to the arduino uno

i have the library in the correct folder?

Hi! Did you follow this tutorial about how to install the library?

Thanks for this. I just had it in my head to make my media PC turn on over WOL along with an IR receiver waiting for a “Power” signal from our remote.

I already have several ENC28J60’s and thanks to you I know that I can use one for just this task (assuming the media PC supports WOL, will check when I get home).

I built this out yesterday and it works like a charm! Again, thanks.

I’m having trouble running this, even after downloading the library it reports errors. Could you help out?