The communication protocol is very simple and it was designed to be “understandable”, with the use of string commands:

Command sent during handshake, to verify that a device is present and can communicate using this protocol;

Request for name and version, the device answers with a string of max 50 characters;

Request for output status (first value) and LED status (second value); the device answers with ON or OFF separated by pipe (in the example out = ON, LED = OFF);

Request to switch output on, the device answers with OK or NOCHANGE if output is already on;

Request to switch output off, the device answers with OK or NOCHANGE if output is already off;

Request to activate LEDS, the device answers with OK or NOCHANGE if LEDS are already activated;

Request to deactivate LEDS, the device answers with OK or NOCHANGE if LEDS are already deactivated.

The sketch running on Arduino Pro Mini is available on GitHub.

Here are some details about the code:

These two constants define device name and the PIN you have to enter for pairing it the your smartphone.

Within the main loop, Arduino receives incoming data from WT11 module. When it receives a complete command (that always ends with ‘\n’ char, which means “new line”), it parses the command using the parseData() method.

At runtime, Arduino can be in two states…

… waiting for connection or connected to a smartphone.

If in the first state,  the parseData() method waits for the command RING from the Bluegiga module; that command indicates an incoming connection:

In the second state on the other hand, the method parses incoming commands using the protocol described above; the NO CARRIER command means that the connection was closed:

Output and LEDS states are stored in the internal EEPROM so Arduino can restore them at boot:

If you connect an USB to serial cable to Arduino, you can read debug messages at runtime with a serial monitor: 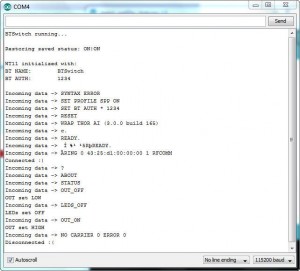 Eagle – Pins with the same name

Nice project, but using Arduino for it is wating of money – simple AT Tiny 45 with software serial would be far enough and you can also keep same program.

thanks for your feedback!

Ora no so come fare.

I tried to follow your instructions. But my bluetooth module is not answering.

Maybe the problem is the module. Your WT11 is no longer available. I ordered then a WT11i-A-AI5. Its the current WT11 with iWRAP 5 firmware. Was this the wrong module?

I tested it on a Arduino Uno and Arduino Mega2560. On the serial port of WT11i will be send these lines:
SET BT NAME BTSwitch
SET PROFILE SPP ON
SET BT AUTH * 1234
RESET
SET

But the request wt11Serial.available() is always 0. Because of this my Android only finds this module WT11i-A (the name is not changed to BTSwitch).

Do you have an idea how to fix it?

Thank you in advance.

your bluetooth module should work fine… have you an usb->serial converter you can use to connect WT11i to your PC? It’s easier to debug using a terminal emulator instead of using Arduino like in my tutorial about that module.

Thank you for your fast reply. The serial adapter helps a lot.
I solved it now partly. In my module was the baud rate 115200 by default. I only had to change this in your code.

Thank you in advance.
Peter

I solved it now.
1. WT11 is only working fine trough software serial if the baud rate is smaller than 115200 baud. Now I also use 9600. With hardware serial a higher baud rate is no problem.
2. I use a Arduino Mega -> Software Serial can not be PIN 2 and 3. I used 10 and 11 and it works fine.
3. In Android 4.2 on the Nexus 4 there are “new” Pairing mechanism. There is no pairing where I had to type the PIN. I tried other pairing mechanism with this command “SET BT SSP”. But there the Arduino has to accept the phone.

Okay now it is running. Thanks

Thanks Peter for your update… about the pairing problem, it changed the way an android app has to pair to a new device, so my app doesn’t work for Android 4x. I’m going to update it, please try the new version when it’ll be published on the market and let me know if it works for you