In my previous tutorial, you learned how to display a fixed text, coded and saved in Arduino’s program memory, on your display. Now you’re going to learn how to display dynamic text…

If you want to compose a text at runtime, you need to code each character, saving them in the program memory.

You can do it manually (“drawing” characters on paper); to speed up the activity I developed a Windows tool, LetterToBinary: 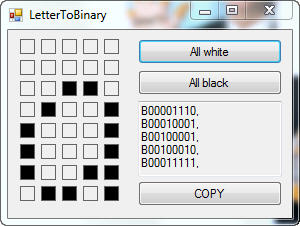 Program’s source code (C#) is available in a GitHub’s repository; you can also download a compiled version here.

With LetterToBinary you can easily get a character’s coding and copy it in Windows clipboard; I used this tool to code all the characters in Ai Pointe font, by Ritchie Ned Hansel:

Font is then saved in a PROGMEM array:

I divided the font from the main sketch saving it in a .h file, which also contains the definition of FONT_INFO struct:

and an array with FONT_INFO elements, one for each character:

From this array Arduino can learn that – for example – the $ character is 5 bytes long and starts from byte 12 of aipointe_font[] array.

If you observe an ASCII table, you can notice I started coding the font from character ! This character has a decimal value of 33 and its informations are saved in element 0 of aipointe_info[] array: this means that, to know the position each character has in that array, you need to substract 33 from their decimal value.

In the next page, we’re going to use the font just coded in a sketch…

My blog in chinese ;)

I have a 3208 matrix display likes yours, but when i upload the arduino’s sketch all is working well but the text display is rotated 90 degres. It’ s like the leds panels aren’t wired in the same position.

How can i modify your sketch to getting the correct position?

mmm it seems they rotated each matrix 90 degrees? What does it happen if you run the “static text” example (nr 3)? Could you please post a photo?
Thanks

Yes, each matrix is rotated 90 degrees.

mmm I wasn’t able to find any datasheets about your display to know how they connected each matrix to the controller. I’m going to send you a demo sketch via mail to do some tests…

Hi Luca, here some info about this led matrix( datasheet…)

Thanks a lot, i ‘am ready for testing.

could you try to run my first sketch: http://www.lucadentella.it/2012/10/03/matrice-di-led-con-ht1632c-2/ and write down the sequence leds turn on? So we can understand how leds are mapped to RAM cells… thanks!

Hi luca, i upgraded my fileshack library with the images, arduino UNO running your first sketch.

The order is, the first dot begins at the rightest matrix, at bottom right, and the last is the upperest left, always in horizontal direction form the right to the left. Similar for the four matrix.

I’ve just sent you a demo sketch for your display, let me know how it works

Thanks vor the great help ! I Try the same Projekt but i try to make 2 led Matrix with 8x 32 Leds with 16.000 mcd each red led. I want go give any Text out of my rear from my Car XD such as the German Police .

Great thanks from Germany !

Hi Lucca thanks for your help, finally i found a compatible library in Github, otherwise i keep regarding your project 🙂

Good news, Luis!
Could you please send me the link of your library? I’ll add it in my article…
thanks

Searched all over github (and the rest of the internet :)) but can’t find working solution.

Currently I am working on Sure Electronics 0832 Display interfacing with PIC16F1937.
I am using SPI interface between PIC16F1937 and Display.

I am facing problem with Scrolling Message across Led display. I made 4*7 character library. Every time i am shifting 4 columns in address for displaying next char. but it overlaps.I am starting with R-L shifting but when it goes beyond 0x00 address ,it overlaps with last addresses(0x3E).

Can you please provide some guidelines for scrolling text. in C?

Hello! Give a look to my Arduino code (on Github): it’s in C. If you have any questions about it write me a comment!

i’m also having the same problem with mcu matrix but can’t find working code on github.
Could you point me in right direction?

do you mean the same problem as Locomolo?

Has been googling and browsing the internet to no result of getting info about manually trigger character from switches.

Now i found your article which is the closest thing i can find related to my needs and i hope you can give me some light in the darkness.

I just need to output automatic transmission gear position (P R N D 3 2 1 O) to 5×8 led matrix.
The input will be +12v via automatic gear selector/switch (no clock generator or such, just a simple open/close switch).

Could you please help me ?

Thanks in advanced luca.

Hi Doug: how do you “know” which gear is selected? Does a single switch corrispond to a specific gear (I mean, do you have 8 switches for 8 gears)? You could monitor the status of each switch using a digital PIN of Arduino and then, with some if display the correct letter on the led matrix