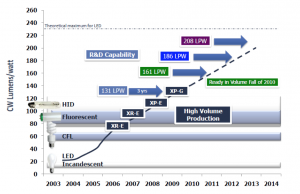 This type of LED has to be driven by a constant current source: 3W LEDs have a nominal current value of 350mA. I designed a module to drive a single 3W LED and to change its brightness using a PWM signal.

My driver is based on ZXLD1350 IC by Zetex (now Diodes); this integrated circuit is a step-down converter with a maximum output current of 350mA:

R2 resistor and L1 inductor form – in conjuction with U1 device – a self-oscillating buck converter.

R1 resistor and T1 transistor allow a PWM digital signal (generated, for example, by a microcontroller) to drive the ADJ PIN of the ZXLD1350 IC and therefore the brightness of the connected LED.

The PCB has all the components in SMD package, except the supply, PWM and output connectors: 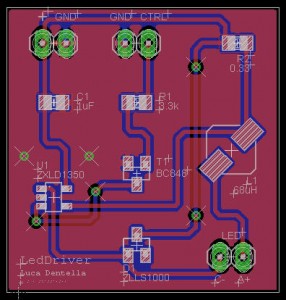 I ordered the PCB using FusionPCB service from SeeedStudio: my experience with that service is documented in the tutorial I wrote some time ago.

All the project was designed using the free version of Eagle CAD and the files (.sch, .brd and the partlist) are available on Github.

Here’s a photo about the first prototype: 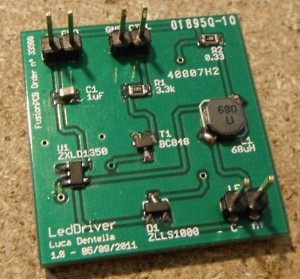 And a short video about its working:

Thanks to my friend Mauro Alfieri for his review about my driver!

POSTED IN » Elettronica, My projects