The most important element of my sketch is the finite state machine that computes the new value (new_byte) to update the buffer.

The allowed states are 5:

The first one (that is also the initial state) means that Arduino has nothing to show: the display is off.

The transition from a step to the next one is controlled by a couple of constants, that define the length (= number of empty columns) of each type of space:

The code that renders a single character is similar to my previous example; while the rendering of a space is just a sequence of zero bytes:

Here’s a diagram about state transitions: 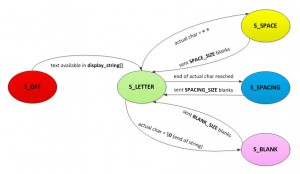 I hope this tutorial helped you to create your own sketches and applications: as usual feel free to write me for any questions!