The sketch is available on Github.

The sketch sends to the client an image, split into multiple packets. The image was converted in byte array using the bin2h utility already presented in a previous example and saved in the like.h file:

As soon as the Arduino receives a new request from the user’s browser, it sends an ACK packet:

In a while loop, the image is then split into blocks, each of 500 bytes (PAYLOAD_SIZE). Each block is copied (using memcpy_P because of thebyte array is stored in the PROGMEM) in the ethernet buffer and sent.

If it is sending the latest packet, this includes both the ACK and FIN flags:

otherwise the packet is sent with only the ACK flag, to keep the connection open:

A test shows that the browser is able to receive all the image segments and to show it correctly:

Thanks to a network sniffer (Wireshark) you can also verify that all the packets are sent as programmed: 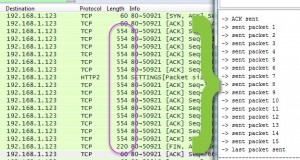 The ability to send fragmented data allows to write very flexible and powerful sketches… in this post you learned the theory behind and a very basic example (the image is hardcoded in the sketch).

In the next tutorial I’m going to show you how to develop a webserver that reads data from an external memory.