If you take a close look at the board, you may notice a connector similar to the U.FL one normally used to connect an antenna: 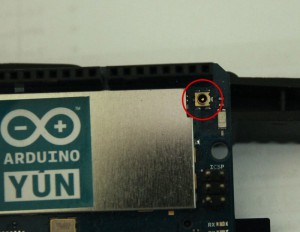 That connector, as someone explained on the official forum, is only used for testing purposes and it’s not suitable for a permanent use.

The easiest solution is to use a cheap USB->wifi adapter that supports external antennas, let’s see how to do that…

First you must be sure that the adapter you are buying is supported by the Linux distribution (OpenWrt) running on the Yun. My suggestion is to verify that the kernel modules (that are the “drivers”) needed for your adapter are included in the list of the available packages for the Yun.

I chose an adapter based on the Ralink RT5370 chipset (available on eBay for about 8 euros): 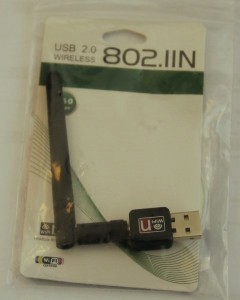 After having inserted the adapter in the Yun’s USB port, if you run dmesg command you can verify that Linux discovered the new peripheral:

To install the drivers, the Yun must be connected to the Internet. Run the following commands:

If you run again dmesg, you can now notice that Linux registered the correct interface driver:

To proceed, reboot the Yun.

After the reboot, the /etc/config/wireless file should have been updated to include the configuration also for the radio1 device (radio0 is the onboard adapter): 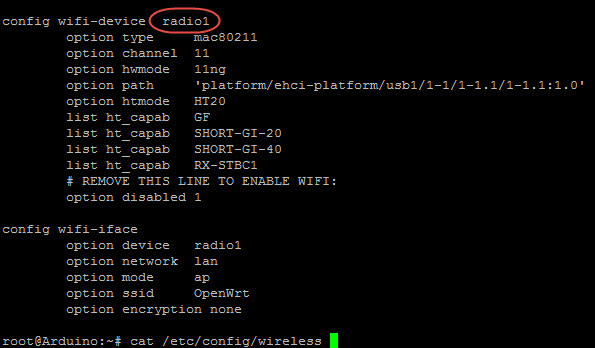 Let’s configure the connection using the web interface. Open the homepage of your Yun and click on Configure, advanced configuration panel.

Choose the Network tab, then the Wifi one. The new adapter is listed with the status disabled or not associated: 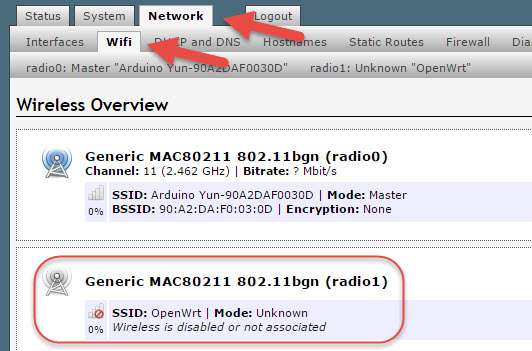 To connect to an existing wifi network, click on Scan:

Choose the correct wifi network and click on Join Network:

Type the password for the network a name for the new connection (I used wlan1) and choose lan as the firewall zone:

Confirm with Submit, then with Save & Apply.

If you go back to the Network tab, the new connection is displayed and the Yun is online: 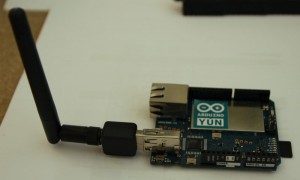 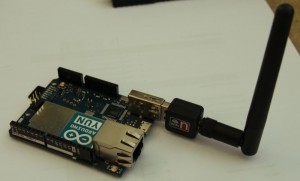 Does it work also as a hotspot like the basic Yun’s wifi?
thanks

Hi! Yes it works, you can configure it using Luci webinterface

I bought mentioned antenna and I use ubuntu for setup the driver of device. it says opkg is not found did you mean dpkg. So i could not do that. Please help.

Hi! opkg is the packet manager for the Arduino Yun (http://arduino.cc/en/Tutorial/YunPackageManager), how could it be missing on your Yun?

I want to use USB Wifi Adapter too for my Yun, and I am excited when seeing this post, so I try to buy an USB dongle which look the same with yours.
But, when I plug it to the Yun, it detects that it is actually MT7601.
Can I use it? I am still new to OpenWRT so I don’t know how to install it (since I can’t install it with the way you do with “opkg install kmod ….”)

Hi, unfortunately it’s not easy to use your USB wifi dongle with OpenWRT… I found this project but it requires a bit of work (compiling…)

yeah, I’ve been reading about using MT7601 on openwrt, and from that link it’s said that we have to build our own package.

I will try it first, but if it fails I will just look for another USB wifi dongle and make sure it is using RT5370

Doesn’t seem to work anymore as it has been removed from the package list. I have tried downloading it directly(wget) and install the files manually only to find an endless dependency errors. Could you share a backup image of your Yun(after removing your credentials of course)?

Hi Dave! Are you sure? I can’t try now (my Yun is running a project) but I found recent posts in the Yun forum about the use of those kernel modules with the latest YunOS image…

Hi! Very interesting post.
But once I know the chipset of my wifi dongle how do I choose the correct driver package from the list of your link to the arduino website?
How did you know that for the Ralink chipset you needed right that specific driver?
Btw I have a Digicom wave 54.
Thank you

Hi John, unfortunately there’s no a generic answer to your question… google may help (searching for “USB WAVE 54 linux” brought me to the zd1211b chipset) but it may be a pain to find and install a suitable module (sometimes you must compile it!). It’s very easier to buy a supported dongle, from the official OpenWRT list.

I’m also trying to connect the wifi usb adapter to my arduino yun.
but when I try to install the drivers it tells me

Hi! Is your Yun connected to the Internet? Did you enter the “opkg update” command before trying to install the modules?

yes I did
I finally got it to work. I had to update my yun linux to the latest version.

My Yun doesn’t display the description of my antenna.

Do you have some ideas?

Everything went well and i’ve got the message”new interface driver process rt2800usb”, but when i reboot yun and check for config-wifi device it’s still in radio0 🙁 Do you have idea what could be?

Thanks a lot for this article. You really saved my project. Let me contribute that this method works as well with the arduino yun mini but a little more work is required:

Connect the USB adapter to the USB+, USB-, 5V and GND of the Yun mini headers

Hi Dinu, thanks for your feedback!

I bought the IDENTICAL package on Amazon in the US only to find the device is now sourced from RealTek and needs RTL8188 drivers which aren’t in the Yun modules.

Daron, thanks for sharing your experience. I found this forum post that may help, let me know if it works for you!

I follow the tuto step by step.
every thing went well until the configuration with the web interface.
The new adapter is listed with the status disabled or not associated.
but nothing went on when i click the scan button.
(with the embedded wireless network i can see all the existing network on scan click).
Do you have idea what could be?

Hi Jacuqes: is the adapter detected by the OS (dmesg…)? Did you reboot the Yun? Sometimes it may help.

Thanks for your answer.

I guess the adaptater is detected dmesg give me the following answer:

and i try several reboot.

Any other idea ?
Thanks so much!

Hi Lucas,
I checked everything once again and noticed a difference with the tuto:

In the web interface Network / Wifi i have:

May i help to find an issue
Thanks