One of the most common errors when you start writing your sketches for Arduino is the excessive use of the delay() function.

This function, as explained in the official documentation, pauses the program for the specified number of milliseconds. Let’s see an example: you connected to your Arduino a button and a led: when you press the button, the led should be turned on for 3 seconds.

The sketch to implement the goal could be (I slightly modified the one in the official tutorial):

Now add a second button and a second led and try to update the sketch to control both the leds, again using the delay() function:

Let’s test the circuit on a breadboard 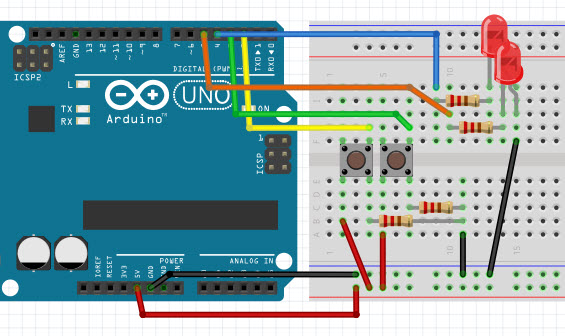 You may note a problem: when a led is turned on, you cannot turn on also the other one! The reason is simple: when the first led is on, your sketch is stuck and cannot check the state of the second button…

To solve the problem, you can use the millis() function: it returns the number of milliseconds since the sketch was started.

If you need to know when a given time has passed, you can:

I defined four new variables: two (led1OnTime e led2OnTime) to save the time when the leds are turned on and two (led1On e led2On) to save the current status (on/off, in boolean true/false) of each led.

When a button is pressed, the sketch turns the led on, saves the actual time and changes the status variable.

If a led is on (its status variable is true), the sketch periodically checks if the on period is longer than the required (30 seconds, it’s 30000 milliseconds): if so, the led is turned off.

Luca, it might be easier for ‘noobs’ to follow if you used symbols instead of &lt and &gt. I know you only used &gt on this occasion. Excellent description of millis() otherwise.

Hi Bob! Thanks for your comment: it seems that something went wrong with my wordpress “code” plugin: I’ll fix it!

Great write up and easy to understand