Irrighino is a complete watering system, based on Arduino Yun.

The main features are:

Here’s a short video that describes the project: 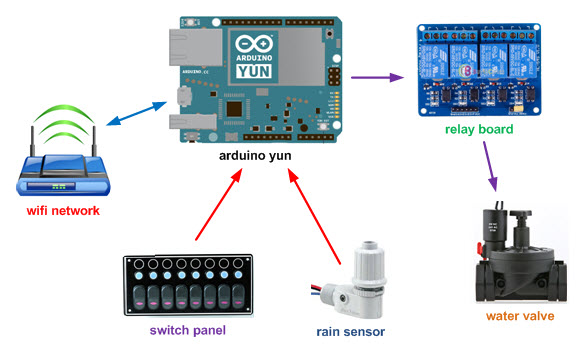 An Arduino Yun – the “brain” of irrighino – is connected to the switch panel (with phsical switches and status leds), the rain sensor and the relay board that controls the solenoid valves. Yun is also connected to the home wifi network: a device (PC, smartphone…) connected to the same network can open the irrighino webinterface and configure and control it.

If you have an Internet connection, with the correct NAT (Network Address Translation) settings you can also manage your watering system from a remote location!

The irrighino web interface is available at the following URL: http://<yun-ip-address>/sd/irrighino

The interface is divided in 3 tabs:

Runtime tab, you can manually control each valve 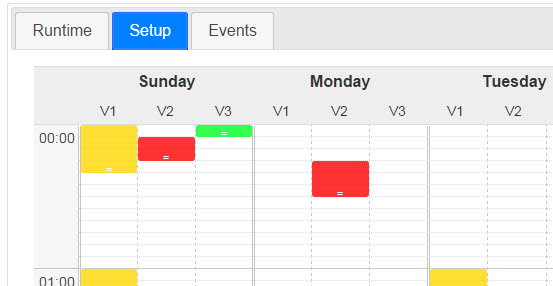 Setup tab, you can define the weekly schedule

Events tab, you can read all the events 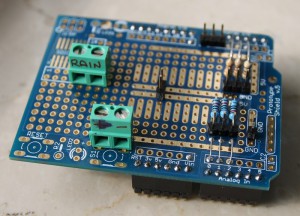 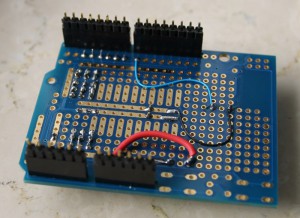 I used 3 position switches (on / off / auto) and I read the switch status using an analog PIN as explained in this my tutorial.

LEDs are connected to digital PINs through 1k ohm resistors, while the relay board (that I got from this store) can be connected directly to the PINs because it carries all the required components (transistors…) to drive the relays.

I drilled holes in the front panel for all the LEDs and the switches and connected them to the shield: 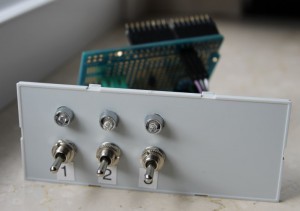 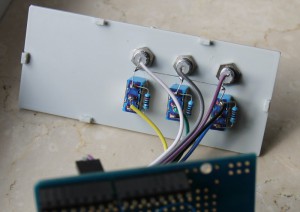 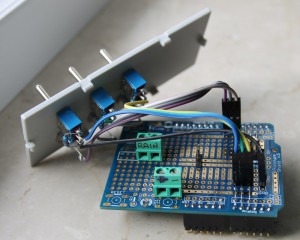 I put the Yun in a plastic enclosure for DIN rails (6 units). When closed, I noticed that the wifi signal strength was very poor… I therefore decided to add an USB wifi adapter with an external antenna, as explained in this my tutorial. I mounted the antenna outside the enclosure and connected it to the adapter with an RP SMA male to female cable brought on eBay: 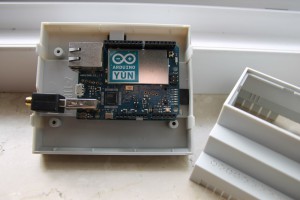 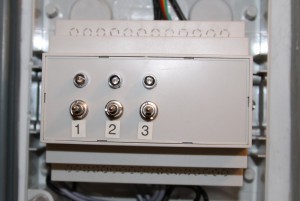 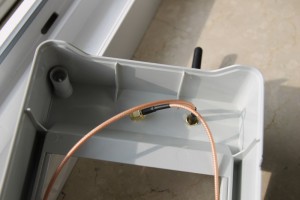 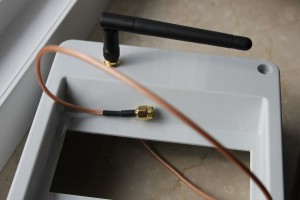 The relay module has been mounted on a dedicated box: 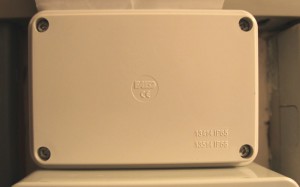 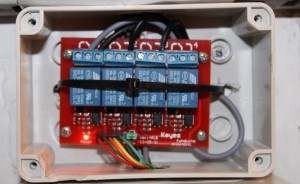 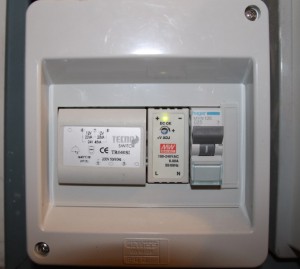 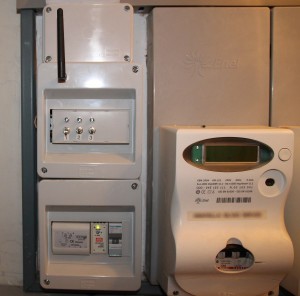 The watering system is divided into zones, each one connected to a solenoid valve.

I put the valves in cockpits. Each valve is connected to a relay, that supplies the correct power (24v) when activated: 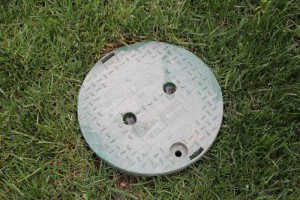 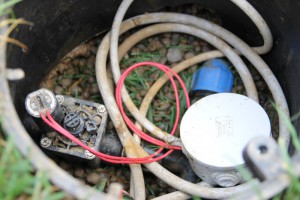 The rain sensor is no more than a switch controlled by a spongy material. When this material absorbs the rain, it begins to expand up and triggers the switch. So you can read its status connecting it to an Arduino digital PIN (in my sketch I used the internal pullup resistor): 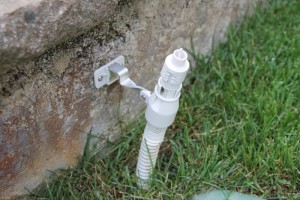 The software that runs irrighino is divided in 3 elements:

Thanks to a configuration file (include.php) you can customize the number of outputs, their name and color…: 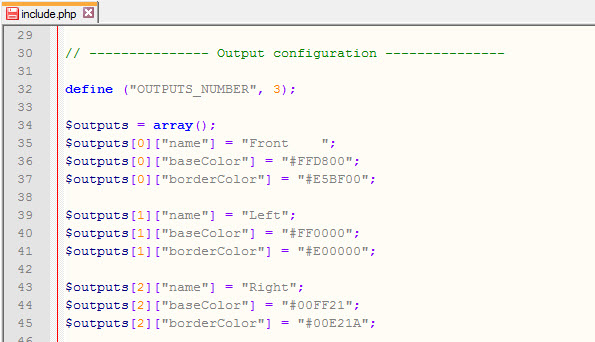 All the code is available on Github. The README file (that will be updated at every new release) explains how to install, configure and customize!

If you’re using an Arduino Yun Rev.2 or an Yun Shield, I wrote an article to explain how to prepare those boards to run Irrighino
arduinofeaturedirrighinoyun
114 comments
0
FacebookTwitterPinterestEmail

Think this sensor would work?

Yes, it outputs a digital level (ground when it rains)

Can you provide a Bill of materials or at least the manufacturer and part numbers of the valves and rain sensors?

Hi! I sourced those parts in a local gardening shop… for the valves, every solenoid valve should work, just pay attention that some require 12V and some 24V. My valves are made by Rain (an italian company) and the rain sensor is made by Orbit.

I’m working on something that uses the same principles, but I’m lacking useful information on a suitable watering system.

Would you be able to share more detail on that side of it – the type of water valve used. A google search of the image you used in the diagram did not appear to resemble the actual watering spout used in the video – but maybe I am missing something in the watering system setup.)

I’d appreciate any pointers you might have in that regard.

Again, great work, and all the best,

Hi Richard, I provided the link to the water valves and the rain sensor I used in another comment. Thanks!

I installed my yun your project and gives me a lot of mistakes, I think we all are connecting to the database.

Every so often you get an error: “DataTables warning: table id = events-table – Invalid JSON Response.”

What can be the problem ??

Hi! Are you sure you installed all the required php modules as explained in the readme? does the log folder you defined in the include.php exist?

Amazing project! I have been dreaming of doing something like this for some time.

Hello
I have a problem. Left position is available. Where to look? sketch or Web page?
Regards

Hi! What do you mean?

I’m thinking in a similar project, but I would like to connect two usb devices, an external antenna and a usb webcam, using an usb hub, something like that http://amzn.to/1pCnhsq

Do you if it is possible ?

Hi Pedro, I was told that an external USB hub works with Arduino Yun but I never tried.

After reading your post I was convinced to buy an Arduino Yun, but I’ve seen that nowadays it is discontinued.

According to the information I’ve find in the web “Seeeduino cloud” appears to be compatible and similar to Yun, but I’m not sure.

Could you give some advice ?

Hi! I’ve no experience with that product but it seems that it’s fully compatible. Unfortunately the Yun seems a discontinued product, I’m planning to port the irrighino project to Raspberry Pi…

Thanks for your answer Luca !!

Can the rain sensor be made DIY mode? ; i.e. experimenting with a piece of plastic pipe & sponge ??
Thank you

Hi! Of course… the sensor can be anything that closes the circuit if it’s raining 😉

Great Projekt
I build it for my own with a few modifcations.
No Rain sensor, no switches, but up to 8 solenoids,
so i can controll the filtering & salt system of my little pool.
I went in trouble setting up the with a dragino Yun shield and an Arduino Uno.
The solution was to limit the baud rate to max 115200, currently i go down to 57600.
lineo-side i put the following line in /etc/rc.local

so everything works smooth.

Thx for publishing this awesome Project especially the AJAX-parts.

Hi, thanks for the feedback and the suggestion about Dragino!

hi, how can deactivate the reins sensor and switches? i want only from web, me error is “Warning unable to call irrighino” thanks

hi fernando, you can disable the physical switches using this const:
#define USE_SWITCHES false
if you don’t need the rain sensor, simply connect the corresponding pin to ground

[…] use this setting with this Project Its working in my Garden for 2 Months now, without any […]

Hi Luca, I’m thinking to use this system in my house as an experiment and first steps with arduino. But I’m wondering if the code that you uploaded to github is compatible with other variants of arduino more cheap because it’s my first project.

hi Marcos, no you have to use the Yun because my irrighino project requires a linux distribution.

Many thanks for this project, it match perfectly with my project. I’ve been following your project and everything is working perfect, except one thing. The relay module works with inverse logic and if I connect valves with your configuration and power supply fails, valves will being open while the power supply will returns. Have you take in consideration this? If you have solved this, How did you solve?

Thanks in advance
Kind regards

il problema si presenta solo in fase di ON, in OFF tutto funziona

Hi Luca, i have a arduino yun whith thr last versión, i want install irrighino, i need preparate thriller board installing Ph or only os for rev2? Thanks