The project I’m going to describe today it’s a sort of proof of concept that will demonstrate the possibility to remote control sensors and actuators (for example a couple of relays) via Telegram.

Telegram is an instant messaging application, similar to the famous Whatsapp. Last June, the Telegram developers announced that a new set of APIs were available to develop bots.

A bot is a computer program that can (partially) act as a real user: receive/send messages, join group chats… bots for example have been and are still very used in IRC channels.

My idea was to develop a bot, running on my Raspberry Pi, that receives commands via Telegram chats. I connected to the Raspberry a temperature/humidity sensor and a module with two relays. Here’s a short video that describes the project:

The working of the bot is shown in the following diagram: 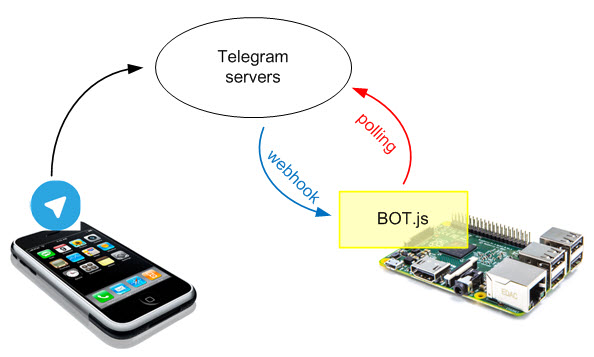 The user, through the Telegram app installed on his smartphone, starts a chat with the “bot” account; the messages are delivered to the Telegram servers. The program running on the Raspberry can get the messages in two ways:

The second solution requires a public IP address (static or a dyndns service) and some configuration (NAT) on your Internet router, I therefore chose to implement the simpler polling.

The first step in developing your own bot, is to create it in Telegram. You create new bots or configure existing ones sending the right commands to a “built-in” bot, the BotFather: 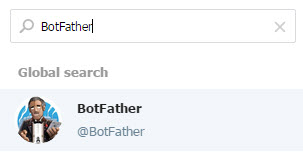 Start the process to create a new bot sending to the BotFather the command /newbot. You’ll be prompted for the name (display name) of your new bot and for its username. If the process is successful, you’ll receive an authorization token, that is the “password” you must specify in your program to “impersonate” the bot: 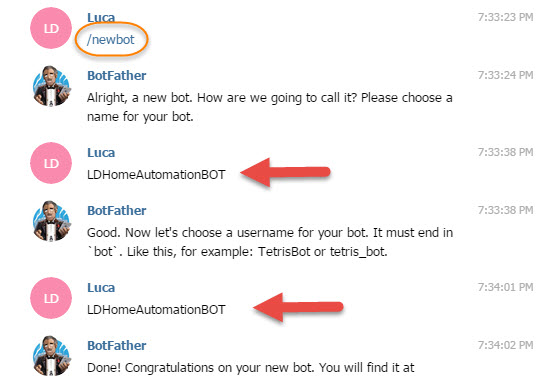 My bot was developed in javascript to be run withing the Node.js server environment (please refer to the great tutorial from Adafruit to install it on your Raspberry). The program needs 3 libraries:

The library installation is super simple thanks to the NPM (Node Package Manager). Create a new folder to save the bot code and, within that folder, type the following command:

Copy in the same folder the bot’s javascript code, available in my Github repository. The code has a lot of comments and should be easy to understand: for any dubts feel free to add a comment to this post!

Remember to change the token in the code, typing the one generated by the BotFather for your bot:

To run the bot, type:

The available commands are: 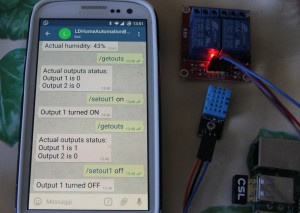 Telegram bots are public, that means that every user can send messages to them. To be sure that my bot will answer only to me, I added in the code a check on the ID of the user that is sending commands to the bot:

If you need to retrieve your Telegram ID, you can use a small bot, this too available on Github, that simply answer each message with the original one (echo) and the sender ID:

In my example, I used a DHT11 temperature/humidity sensor and a module with two relays. I connected the two elements to the expansion PINs of my Raspberry (1 PIN for the sensor and 2 for the relays, in addition to the power supply): 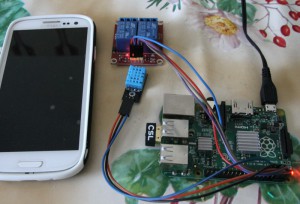 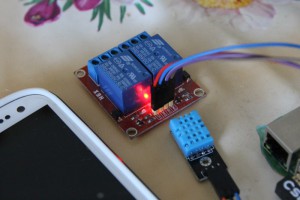 In the program, I configured the correct PIN numbers:

The goal of this project was to demonstrate how it was possible to develop a bot that can receive commands via Telegram: it’s a starting point.

Telegram APIs offer a lot of advanced featured to explore, for example the ability to list the available commands, to change the bot’s avatar or to customize the app keyboard: in my example, when the user sends the /setout1 command, the bot may ask the desired status (ON|OFF) for that output customizing the app to show a keyboard with only two buttons, for the two possible choices.

Did you know that Openhab has this functionality as well? Someone made an addon for telegram interaction.

It might be not as much fun as doing it yourself, but you could give it a shot 😉

Hi, thanks I didn’t know the OpenHab project, very interesting!

i have problem with 1 line bot.js

Hi! you’re using the python interpreter while the code runs on node.js

Hi Luca, I have problem
where i can get authorized user ?

Hi! Run the “userid.js” bot, you can download it from Github. When you write a command to the bot, it outputs on the console your user ID

Luca, Thanks for the tutorial. I am confused on the polling or webhook. Where is the loop or event polling the telegram server every 2 seconds in the bot.js listing? Or how this works?
Please let me know where can I find details . Thanks in advance !

Hi Jose, all the interaction between your bot and telegram is performed by the Bot library I’m using, no external code is required.

Luca Thanks a lot again. I’ve installed on RPI running ArchLinux and works perfect. Only problem the DHT module was not possible to install I’ve tried several times and on the middle of the install the RPI gets extremely slow and almost hungs and I must do hard reset. This is not an issue for me as I do not have that sensor, I will try using the npm for the DS18b20.
Concerning my previous question, then the polling seems to be the default as the script never mentioned it right ?

Hi, I was testing your code, it was working fine but then I don’t understand why I get this message everytime

hi, do you mean that you get an error/warning message on that line?