After having learned how to drive a nixie tube with Arduino, today I’ll show you how to read the data coming from the temperature sensor. 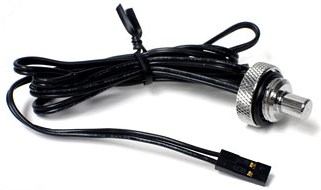 The sensor I chose, designed for liquid coolers, it’s a 10Kohm thermistor. It’s indeed a resistor whose value changes based on its temperature; the nominal value (10Kohm for my sensor) is the resistance the sensor has at a temperature of 25°.

I can therefore use an analog PIN of my Arduino to read the voltage across the sensor and then calculate the resistance. You also need to add a pull-down resistor – this too with a value of 10Kohm – as it follows:

To convert the raw data read by Arduino’s ADC (analog to digital converter) to a temperature value, you can use the Steinhart-Hart equation:

this equation calculates the absolute temperature (T, Kelvin) from the resistance (R) and 3 constants that depends on the specific thermistor you’re using. For 10Kohm sensors, the typical values of the constants are:

You can now write a function that calculates the Celsius temperature (Kelvin – 273,15) having the value returned by analogRead() (RawADC) as its input:

I wrote a sketch (available on Github) that, every two seconds, reads the temperature from a thermistor connected to PIN A0 and displays it on the serial monitor: 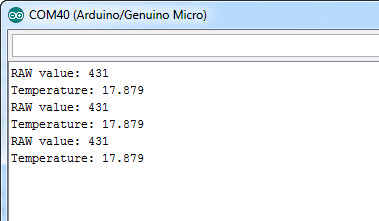 Nixie thermometer – two is better than one!