Being a comics fan, I couldn’t resist publishing a crossover between my “famous” tutorial about using the enc28j60 driver with Arduino and the fresh new tutorial about the MQTT protocol.

So, after having introduced the MQTT protocol and explained how to use mosquitto, today I’ll show you how to send data to an MQTT broker using the enc28j60 ethernet controller.

We’re going to use the PubSubClient library by Nick O’Leary to “talk” with our MQTT broker (mosquitto). You can install the library using the Library Manager in the Arduino IDE (Sketch menu – Include Library – Manage Libraries…):

The library I chose is based on the Ethernet Client API of Arduino, usually available if you use the “official” ethernet chip (W5100). I’ve already blogged about the UIPEthernet library that allows to use sketches and libraries designed for the W5100 chip also with the enc28j60 one. After having installed also this library in the IDE, you’re ready to write your first MQTT sketch…

For this tutorial I decided to connect to the Arduino a temperature (and humidity sensor): the DHT11. I’m going to use the DHT sensor library by Adafruit to read values from that sensor, this library too can be installed through the Library Manager. 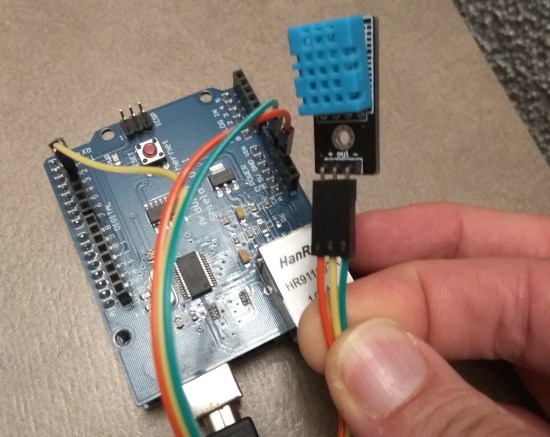 The full sketch is available in my Github’s repository.

Let’s see the most important lines of code. After having included the required libraries, the sketch defines some constants, like the topic to send data to, the identifier of the MQTT client, the interval between two transmissions and the configuration of the sensor:

the MQTT client is configured passing the Ethernet client to be used and the server (and its port) to connect to:

in the main loop() the sketch checks is the interval between two transmissions is passed; if so it reads the new temperature value and sends it to the broker:

it’s very important to call the loop() command of the MQTT Client frequently to let it process the different incoming packets and commands:

every tot seconds, the sketch reads the temperature, displays it on the serial terminal and sends the value to the broker. The library returns a float value, it’s therefore required to convert it in string before sending (using the dtostrf command):

Before running the sketch, first you have to start mosquitto on your PC. Open a second command prompt and run mosquitto_sub to subscribe the temperature topic:

if you now run the sketch, you should be able to see the temperature values sent to the broker and, from this one, to the subscriber: