In the previous posts I’ve described the new esp32 chip and explained how to setup the development environment, including the use of one – optional – graphical IDE, Eclipse.

Before starting to develop your programs, you need to understand three key components of the framework: flash, bootloader and FreeRTOS operating system. But don’t worry! At the end of this post you’ll write, compile and execute your first program (even if “minimal”) and starting from the next tutorial we’ll work together on more complex examples.

As I wrote in the first post of this tutorial, the esp32 chip requires an external flash memory to store programs, data, configuration parameters…

The external memory is connected to the chip via the SPI bus and the supported capacity is up to 16Mb. The official Espressif module (ESP-WROOM-32) includes a 4Mb flash memory made by GigaDevice (GD25Q32): 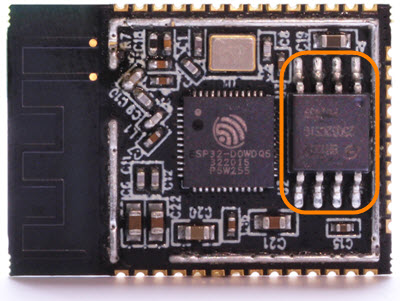 The flash memory can store different elements: programs, data… hence it’s divided into sections (partitions). The list partitions, their size and position within the flash memory is stored in the memory itself (at address 0x8000) and it’s called partition table.

When writing a new program, the developer can decide how to organize the flash memory based on the program’s specific needs. The esp-idf framework offers two pre-configured memory layouts, you can choose from the configuration menu:

You can also show the project’s partition table with the make partition_table command:

In the screenshot above, you can see the partition table layout that corresponds to the simplest configuration (Single factory app, no OTA):

To better understand why the flash memory is divided into partitions, I have to describe you how the esp32 bootloader works, that is how the application is started and how a new firmware is uploaded.

In the esp32 ROM memory there’s a small program, named first-stage bootloader. This program is executed at each reset of the chip: it configures the access to the external flash memory and, if required, stores on it new data coming from the serial/USB port (flash process). Once finished, it accesses the flash memory (at address 0x1000) and loads and executes the second-stage bootloader.

Even if the standard behavior of the esp-idf framework is to use this second-stage bootloader, you can also develop a stand-alone application that, stored at address 0x8000 of the flash memory, is directly executed by the first-stage bootloader.

The esp-idf framework is based on the FreeRTOS Real-Time Operating System. It may sound strange to talk about operating systems when working on a “small” chip like the esp32… but you don’t have to think that FreeRTOS is an operating system like Windows, Linux or MacOS. The main feature an embedded operating system offers – thanks to its internal scheduler, is multitasking, that is the ability to run different tasks in parallel. We know that a microprocessor core can execute an instruction at a time: it seems that different applications run simultaneously because of the scheduler is rapidly switching between their tasks. 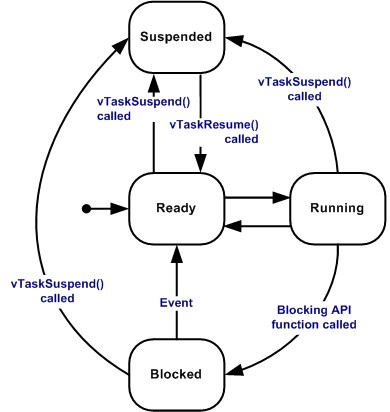 A real-time operating system is design to guarantee that task scheduling is deterministic: you can predict the behavior of its scheduler. FreeRTOS allows the developer to define a priority for each task: the scheduler uses priority values to define the execution pattern of the different tasks.

Let’s write our first program that used the esp-idf framework. This program, available in my Github repository, will be the skeleton for all the next tutorials.

First we must include some libraries:

The stdio.h library (Standard I/O) is used for input/output functions (printf…) and the two freertos header files are used to define and execute the different tasks.

Every program is executed starting from the app_main() function:

In the app_main() a new task is created using the xTaskCreate method. This method requires the following parameters: the pointer to the function (&loop_task) that contains task code, the name of the task (“loop_task”), the size, in words, of the stack memory to be assigned to the task (512), additional parameters for the task (NULL), the task’s priority (5) and the pointer – optional – to retrieve an handler of the task (NULL).

Once the task is created, the FreeRTOS scheduler executes it based on the different tasks and priorities.

The task has the following code:

it’s a continuous loop that every second prints the sentence Hello World!”. The vTaskDelay method pauses the task for the specified number of ticks. The portTICK_RATE_MS constant defines the duration, in milliseconds, of a tick; if you therefore divide 1000 for that constant you get the number of ticks in a second.

To be able to compile your project, you need to add a couple of additional files:

When the program is ready, you can compile and load it on the board as explained in a previous post:

If everything is ok, when you connect to the board with a serial emulator you should see:

hey! once I run the original code, the ESP32 board will get panic，and finally I discovery that the parameter “512” should be set as 1024 or 2048 in the function xCreateTask() ,then the program will run perfectly,why??

Hi, that parameter is the stack size, so it depends on how much memory (= variables…) the task will allocate

hi, you have given marvellous explaination.
Thank a lot,

Hi,
in many examples from the esp-idf, like the simple_wifi one, the app_mail just terminates, and does not start a task.
What is the difference between the two approaches ?
Thanks !

Hi, for simple programs you can implement everything in the main… but if you need to use some multi-tasking features (like the wifi driver…) you have to start a thread otherwise your program simply ends.

Dear luca, thanks for such a great tutorial site for ESP32. Lot of things are more clear to me because of these tutorials.

Hi Igor, at the moment I don’t have an article about it but on the Internet there are other good tutorials about low-power modes in esp32.

Luca, Is there a way to directly write to the NVS on the ESP32 without running a sketch?

yes, there’s a specific tool to prepare a binary image that can be directly written to the NVS partition.