In embedded applications it’s often necessary a clock, as accurate as possible. For example, imagine a device that has to activate an output at a given time or a logger that has to store values (temperature…) at precise intervals.

A solution widely adopted is the use of an RTC (Real Time Clock) chip. The problem becomes how you configure the RTC chip with the current time and how you keep it synchronized. Some time ago, I published a project (RTCSetup) to configure an RTC connected to an Arduino using the time of your PC; today I’ll show you how to use an Internet time service with the esp32 chip.

The basic working principle of SNTP is as follows:

- the server answers with different fields, among which is the timestamp value, 64bit long, where:

In a previous post I’ve already introduced the lwip library, chosen by the esp-idf framework to implement network communcation. The library includes an app (sntp.c) which implements a SNTP client.

Let’s see how to use it in your program (the full source of the test program is available in my Github repository).

First you have to include its header file:

Then configure the SNTP client in poll mode, to query the servers every n seconds:

Alternatively, you can configure the client in listen only mode (SNTP_OPMODE_LISTENONLY). In this configuration, the client will listen for broadcast updates, without actively query any servers.

Some configuration settings of the client, including the update delay (in milliseconds), can be changed in the sntp_opts.h file:

Now you have to tell the SNTP client which server it has to use. A common choice is to use the cluster of servers from pool.ntp.org. Alternatively, because of I live in Italy, I normally use the SNTP server offered by the Istituto Nazionale di Ricerca Meterologica (ntp1.inrim.it) that has an atomic clock as its time source.

In the example provided with this post, the server name can be configured via menuconfig:

After having configured the client, you can start it with:

the client will be executed in parallel with the main program.

To get the actual time from the system clock, use the time() method which updates a time_t variable:

The time_t variable usually represents the time as the number of seconds from a date called Epoch (01/01/1970). To split the variable into the different time values (year, month, day…) you can use the localtime_r method which updates a tm struct:

The fields of the tm struct are defined in the time.h file: 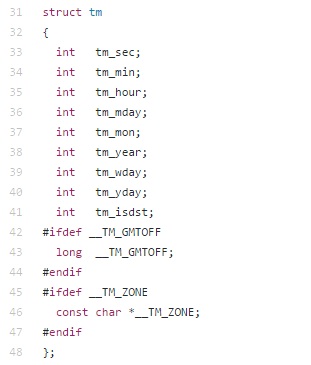 We can verify if the first sync with the SNTP server was perfomed with success for example checking the year field:

Many date and time functions have two versions, one “normal” and one restartable (es. localtime and localtime_r). In a multithread environment like the FreeRTOS operating system is always suggested to use the functions with the _r suffix because they can be executed in parallel (reentrancy) as they don’t use common buffers.

If the struct tm is available, you can then use the strftime() method to format a string with the pattern you prefer. Many placeholders are available: they are described in the manpage of the method. Here are some examples:

SNTP servers keep the time with the UTC (Coordinated universal time) time zone. You can change the time zone modifying the TZ environmental value with the method:

name is the name of the variable and value the value for it. If overwrite is > 0 the method updates the variable if already exists.

Once the value for the TZ variable is set, you can initialize the timezone conversion routine with the tzset() command.

The TZ variable can have two different kind of values, depending on whether you want to handle daylight saving time or not.

In the simplest form (no daylight saving time) the format is std offset, where std is the name for the time zone (3 or more characters long) and offset specifies the time value you must add to the local time to get a UTC value. For example Italy is in the CET (Central European Time) timezone, which is one hour ahead from UTC (therefore offset -1). The command to use in Italy is:

The command is therefore:

On the Internet you can find websites that lists the TZ values for different countries.

In conclusion, if you want to convert the time to a given timezone the steps are:

In the example program: