In my previous article I explained the Bluetooth Low Energy technology and the advertising process.

You learned that a BLE device can leverage the advertising packets to send data; in this case the device is called broadcaster and the devices which receive data are called observers.

The payload of an advertising packet has the following structure:

ADV ADDR is the device MAC address (this is the address displayed by the program developed in the previous article) and ADV DATA is a field, with a max length of 31 bytes, that contains one or more structures, each with 3 elements:

The official website of the Bluetooth Special Interest Group lists all the available AD types.

A device, for example, can transmit its local name using the AD type 0x09:

The Bluedroid library contains a method, esp_ble_resolve_adv_data(), which allows to get the value for a specific AD type passing the raw data. The header file esp_gap_ble_api.h contains definitions for the most common AD types:

In my Github repository you can find an updated version of the scan program. Thanks to what explained above, now the program can also display – if available – the name of the device:

A particular family of broadcaster devices are the iBeacons. These devices have been designed by Apple to allow interaction with IOS devices (iPhone …) based on location awareness. Let’s make an example: an iPhone can “notice” that it is close to a particular iBeacon, associated with a room in a museum, and therefore offer the user a brief guide to the exhibited works. 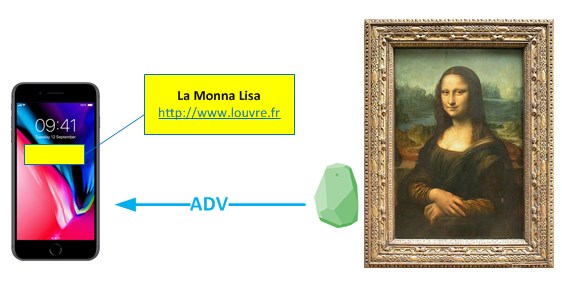 The first structure has AD type = flags (0x01). Each bit has a different meaning, usually iBeacons use 0x0A value for AD data.

The second structure has type = 0xFF, that is Manufacturer Specific Data. The Bluetooth standard allows the different manufacturers to use this ID to transmit custom data. The total data length is 25 bytes (0x1A – 0x01 that is the length of the AD type field).

The first field is the manufacturer/company; iBeacons normally use the code 0x004C, assigned to Apple Inc. The next two fields define the iBeacon type and have a fixed value (0x02 e 0x15). The UUID field, together with the Major and Minor ones (optional, they can have a value of 0) uniquely identifies each iBeacon.  (insieme con i campi Major e Minor (facoltativi, possono essere impostati a 0) identificano univocamente il singolo iBeacon. Finally, the TX power field contains a measurement, one meter away from the iBeacon, of the received power and is useful for  precisely estimate the distance between the phone and the iBeacon itself.

I developed a program for the esp32 chip which turns a relay on if it detects a specific iBeacon. Via menuconfig you can configure the UUID of the iBeacon which triggers the led, the pin the led is connected to and the timeout – in seconds – after which the program turns the led off if the iBeacon is not detected anymore. You can moreover set a power threshold to control the distance at which the iBeacon is detected.

To parse the received packet and get the UUID value, in my program I used the method described in this article (parsing using a struct).

The program verifies if the received packet (event ESP_GAP_SEARCH_INQ_RES_EVT) was sent by an iBeacon checking that the packet length is 30 bytes and that its header contains the values listed above:

It compares the fixed header with the received one using memcmp, function that compares two blocks in memory:

The source program is available in my Github repository, here’s a video that shows how it works:

In the video I use an iBeacon from WGX. If you want more information about it, in this blog post I review this iBeacon…

Hi,Luca
Thank your for these tutorials. Did you try to use esp32 with both ble and wifi?

Hi! Yes, it works fine (BLE + Wifi). I think I’ll post a tutorial about it when I complete the “BLE” serie 😉

Hi Luca,
Thanks so much for the great tutorial.
Could you please explain how to program the ESP32 to run both BLE and WIFI? Do you have an implemented code?
Thank you again for your support.

Hi Achille, in a future tutorial I’ll explain it!

Hi luca ağain:D What esp-idf version do you use?

I usually keep my local repository updated with Github, so I use the (almost) the latest version

thanks for the great tutorial. Could you recommend a beacon that I can use with your code that is small, reliable, with a good battery life and that can be used as a keychain. I have trouble finding anything.
Another question: What is the fastest time from startup of the ESP32 till a successful scan of a nearby beacon. It would help me a lot if I knew that.

it usually takes a couple of seconds to boot the esp32

Could you make this sketch work with the tile mate key finder?

Hi Martin, I don’t own a tile make key finder but from what I see it’s a standard BLE device so if you know its mac address, you can scan for it

Hi Luca,
Is it possible to use more than one ibeacon and could we control different pinouts with these beacons?

Sure! Each iBeacon has its own “id” so your program can look for them and act accordingly

Hi Luca,
We are getting an error like “C:\Users\Specvinuser1\Documents\Arduino\sketch_aug20a\sketch_aug20a.ino:27:1: sorry, unimplemented: non-trivial designated initializers not supported” we are using your 26_ble_advertise code please help us out to resolve this issue…

Darshan, you’re using arduino but my examples are not for that IDE/environment. To compile and run my tutorials you need esp-idf.