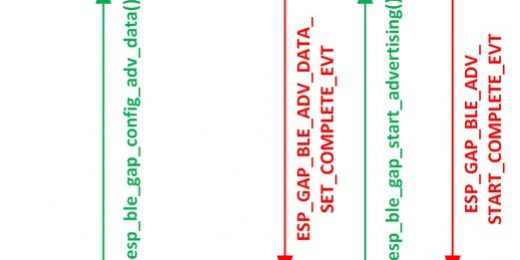 In the previous posts you learned how to use the esp32 chip to receive and parse the advertising packets transmitted by BLE peripherals. As a practical example, I developed a program to detect the presence of a particular iBeacon and activate an output accordingly.

In today’s tutorial, you’ll learn how to transmit advertising packets instead.

You’ve already discovered that the Bluetooth driver included in the esp-idf stack is executed in a dedicated thread. Whenever the driver needs to send a notification to your program, it calls a callback function indicating which event has triggered.

The advertising process is very simple: 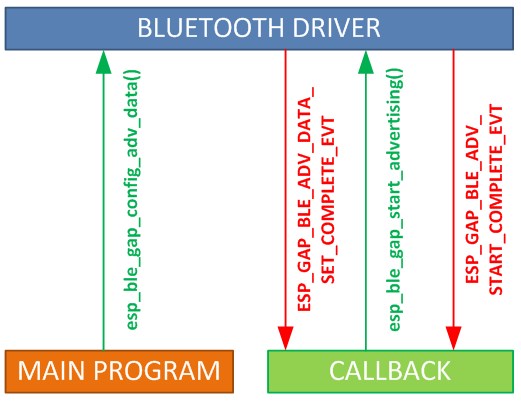 It’s possible to tell the driver which data to include in the advertising packet with the following command:

The command accepts as parameter a pointer to an esp_ble_adv_data_t struct: 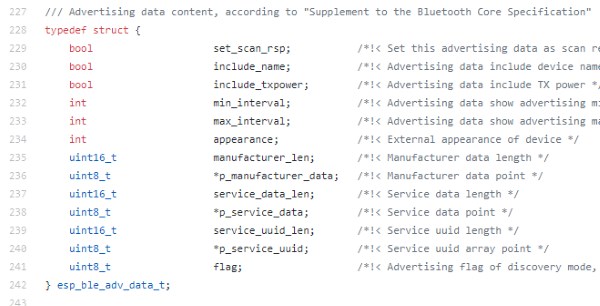 The meaning of the different fields is explained in the Supplement to the Bluetooth Core Specification document.

First let’s find out how to transmit the device name. You have to use the esp_ble_gap_set_device_name() function to pass the name to the driver and set the field include_name to true in the struct:

Using the flags, you can publish some features of your device. The available constants are:

you can combine them with the OR operator. If, for example, you want to tell the world that your device is limited discoverable (i.e. it sends the advertising packets only for a limited time, usually 30 seconds) and that it doesn’t support classic Bluetooth (BR/EDR, Basic Rate/Enhanced Data Rate) you’ll write:

After configuring the content of the advertising packet, you have also to tell the driver how to send the packet.

accepts as parameter an esp_ble_adv_params_t struct: 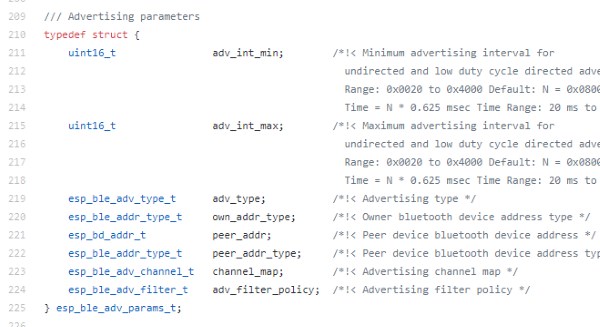 You can configure the minimum and maximum transmission interval of the packet. The two parameters can assume a value from 0x20 to 0x4000. To calculate the interval in milliseconds, the value specified must be multiplied for 0.625. This means that the minimum value (0x20) corresponds to an interval of 12.5ms.

The esp_gap_ble_api.h file lists the constants that can be used for the other parameters (esp_ble_adv_type_t, esp_ble_addr_type_t …).

For example, let’s configure the advertising process as it follows:

I prepared a program that includes what explained above. The source code is available in my Github repository.

Here’s how it works: