This year in March, Massimo Banzi announced on the Arduino blog the production of a new revision (Rev.2) of the Arduino Yun board. 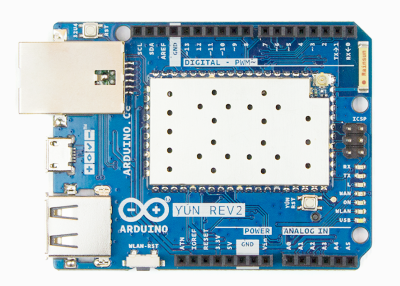 In addition to some improvements on the hardware design, the new revision offers a complete update of the software side of the Yun, that is the Linux distribution (OpenWrt) running on the board. The original Yun was indeed stuck to a distribution released in 2014 (still available in the download section of Arduino website) and that distribution contained outdated software packages which also presented some security vulnerabilites.

Who now buy a new Yun board, has the new OS version pre-installed. If you own a “Rev.1” board, in this article you’ll learn how to update it…

In the Arduino forum, Martino Facchin (one of the contributors of the OpenWrt porting to Yun) published a post with links to an automatic updater for the different platforms (Windows, Linux, Mac). The application updates both the bootloader and the operating system (rootfs). You have to also update the bootloader because of the new OS requires a bigger partition than the original one.

Before running the updater process, there are 3 prerequisites:

The third point in particular is the one that can give more problems… for example I use the Eset Internet Security suite and I had to temporary disable the protection:

An additional suggestion is to disable other network cards in your computer, keeping active only the one connected to the home network:

If you’re using Windows 10, it may happen that the yun-go-updater.exe program is blocked… in this case you have to cancel the block from the file properties:

If you run the program, the update process should go automatically. When complete, if you connect to the Yun board you should see the new version:

During the update process, the Yun board requests a valid IP address for your network using the DHCP protocol. Sometimes this request could fail; in this case you can assign a static IP to the board answering “n” to the first question: