In the previous post of this tutorial, I explained how it is possible to update your board Over-The-Air thanks to a feature of the Freshen IoT dashboard.

Today I’ll show you how to update the firmware running on an esp32 chip using only components included in the esp-idf framework, without the need of any external tools or platforms.

The esp-idf framework offers a set of native functions to implement, in your program, the ability to be updated over the air.

Those functions are grouped in the app_update component and to use them in your program you have to include the corresponding header file:

Altough the use of the native functions is not very difficult (on Github you can find an example program), Espressif developers have added a component to the framework that makes it even easier the over the air update if the new firmware is located on a web site.

The component is named esp_https_ota.

The esp_https_ota component uses the OTA API to update the firmware of your board, downloading the binary file that contains the new firmware from a web site. As the name suggests, the only requirement (for security reason) is that the web site supports the secure version of the protocol (HTTPS).

The component is able to automatically identify an OTA partition in the flash memory that is not in use and to save the new firmware in that partition. It then configures the chip to boot from that partition: 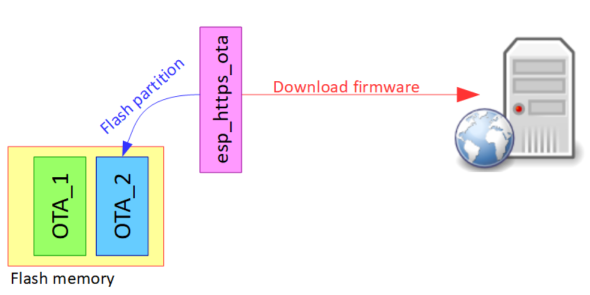 Then you only have to call the function:

to start the update process. If – when the process is complete – the ret variable contains a positive result (ESP_OK), you can reboot the chip to run the new firmware:

A real application would probably need to periodically check if a new firmware is available and, only in that case, to start the update process. How can it be done?

In the program I wrote for this post and that is explained in the video below, I’m going to show a way widely used also in commercial products… enjoy the show 😉

as usual, the source code of the program is available in my Github repository

Really like this Luca. Just what I need! Keep up the good work.

Hello Luca. I would like to ask if you know any way to download OTA with HTTPS + mutual authentication. Have you ever tried this before ? I’ve been looking inside “esp_http_client_config_t” but there is no clients cert* only servers cert.

hi Kostas, at the moment the http client used by the OTA component seems to not support mutual authentication…

Luca
Does the jSON file just contain the firmware version number and the url of the firmware?
e.g. {1.0: “https://mywebsite/firmware.bin”}

It’s great,
does this support for nodemcu.because I am doing a project on home automation using nodemcu as a microcontroller.

sure! if the server that hosts your firmware has a dynamic IP address, you have to use a dyndns service to have a “static” name for it

Your example code works fine but I tried using my own website (halio.us) and used the PEM certificate provided by the website host (GoDaddy) and I am getting an error message:

Found the problem….I was using the wrong cert.

glad you solved and thanks for having reported it!

Hi Luca,
is it possible to use your example using arduino IDE?
Thanks.

Hi William, no sorry my examples are for the esp framework. I was able to google some tutorials for Arduino, give them a look!