In the previous posts I explained how to receive and send advertising packets based on the Bluetooth LE standard.

The payload (that is the amount of “useful” data) of those packets is at most 31 bytes. It isn’t much: if – for example – you want to include the device name, little place remains for other data. 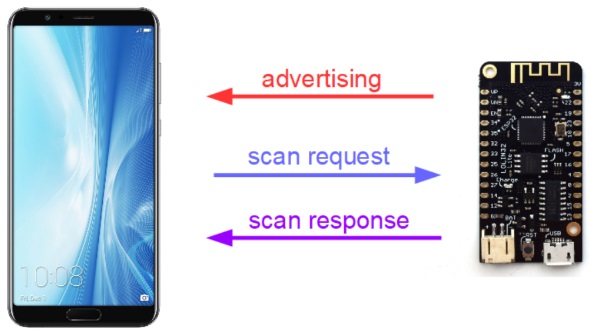 The esp framework offers two modes for configuring the content of a scan response packet: using the esp_ble_adv_data_t struct or creating a byte array (raw mode). These modes are similar to the ones used to configure advertising packets you learned in previous articles (struct and raw mode).

In the first case, you have to declare a second struct, in addition to the one related to the advertising packet, to define the content of the scan response packet:

Very important is set to true the set_scan_rsp parameter. It’s indeed this parameter what tells the driver that this struct is related to the scan response packet.

You can then pass the new struct to the driver, with the same function used previously:

You have to wait until both the events have triggered before starting the advertising process. In my example program (you can download the source code from my Github repository) I use two boolean variables:

If you want to use the raw mode instead, you have to declare a byte array and fill it with the content of the payload of the packet. Then you can use a specific function of the framework to pass the array to the driver:

did you notice that the content of the scan response packet is the same in the two examples?

The driver will confirm the configuration of the packet with a dedicated event. Also in this case you have to wait for the end of both configurations (advertising and scan response):

You can also mix the two modes in your program. For example you can configure the advertising packet using the struct and configure the scan response one using the raw mode.

Now with the nRF Connect app you can verify that your scan response packet is correctly received by your smartphone: 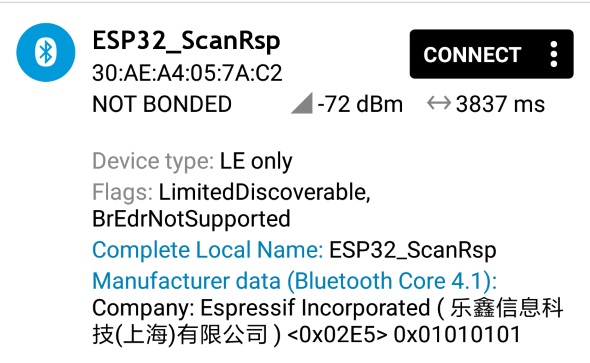 In the following video I explain how I built the payload of the packet and how the program works:

You are one of the only people out there explaining the native BLE api for the esp32. Thank you! I really appreciate it.
But i have a question or rather a comment regarding this example. You’ve set the adv_type to ADV_TYPE_NONCONN_IND but the bluetooth specs say that you need ADV_SCAN_IND to enable scan responses. After changing that attribute of my ble_adv_params I finally got the scan response to work.
Maybe you should edit your tutorial for future visitors.

Thanks Yannik! I’ll update my tutorial following your suggestion!