During the annual The state of Arduino presentation, Massimo Banzi has announced the new Arduino Yún, a device that combine an Arduino Leonardo with a system-on-chip by Atheros that runs a Linux distribution designed for embedded devices, named Linino: 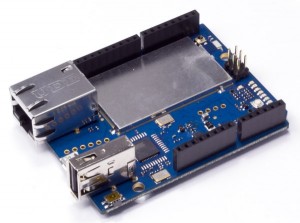 If you read my tutorials about how to connect Arduino to the Internet, you probably noticed that the Atmel microcontroller has some limits when working with multimedia or XML files, while it works great for controlling peripherals, interfacing with devices on i2c or SPI buses, reading analog signals…

Many projects therefore connects Arduino with an embedded board like Raspberry Pi o Olinuxino: the new Yún (available at the end of June) will offer in a single board the power of Linux and the versatility of Arduino… will it be a success?