When I post my sketches, I often receive questions about the reason why I define state constants and, more generally, about the meaning of a finite-state machine. In this tutorial you’ll learn how to use that model to create a simple timer.

You’re going to use Arduino as a daily timer, setting a time to turn on and turn off the load. Arduino will be connected to an RTC (real-time clock) to get the actual time and to a relay to control the load (for example a lamp).

I chose to use two breakout boards, one for the DS1307 IC (RTC) and one for the relay, connected to Arduino in the following way: 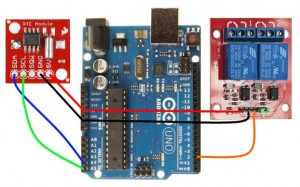 DS1307 IC provides an i2c interface, I therefore used PIN A4 (SDA) and A5 (SCL), while the relay module requires only one digital PIN (in my example, PIN 2).

I installed the RTCLib library provided by Adafruit to get the actual time from the RTC chip; I’ve already used it in a previous post.

It’s usage is very simple: first include two libraries in your sketch:

Then, define a new object of the RTC_DS1307 class:

In the setup(), initialize the Wire (i2c) library and the RTC object:

To get the actual time, now just call the now() method, that returns a DateTime object. This object provides several methods to retrieve the different parts (day, hour, minute…) of date and time:

A finite-state machine is a model that describes the behavior of a system. The system has a finite number of states and can be in only one of them at a time, the current state. The system can change from one state to another on triggers and/or conditions: the change is called transition.

In my example, the system has only two possible states:

The change from one state to the other depends on the actual time and the start and end time set in the sketch. A FSM can be represented using a state diagram:

In the sketch, define two constants that represent the two possible states:

and a variable to store the actual state:

In the setup() it’s very important to define the initial state:

In the loop(), use the Switch statement to identify the actual state, perform the operations and check if the conditions are good for a change of state:

The sketch is available in my Github’s repository, here are a couple of photos about the project working: 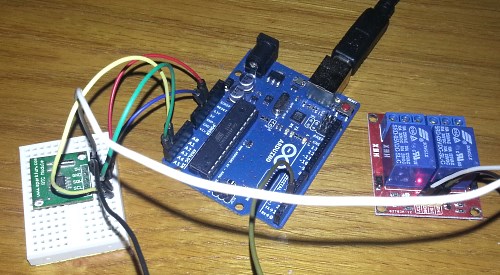