Today I was asked how it could be possible to resume a PC from standby at a given hour… It was enough to connect an Arduino Pro Micro to an RTC module, write some code and the WakeMeUP project was born…

WakeMeUP is a USB device that sends a wake signal to the connected PC at a given time. The configuration is performed through a serial connection: the Arduino I chose (Pro Micro) is indeed able to become a composite USB device, that implements:

I added a realtime clock module (RTC) sold by SparkFun. That module is based on the DS1307 chip, connected to the Arduino via the I2C bus.

All the project was built on a perfboard and both the Arduino and the RTC module were inserted in an IC socket: 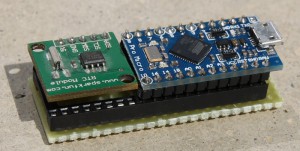 A personal computer may be in different power states, identified by ACPI codes:

Usually, all the mother boards support the wake from S1-S2-S3 states, while only a few support also the wake from S4-S5 (wake from G3 is obviously impossible: no device is powered in that state).

Some mother boards support the power on by mouse or keyboard, but they must be PS2 devices, not USB ones.

You normally configure this feature in the mother board’s BIOS, where you can also enable the USB power in the different states (often used to recharge connected USB devices even if the PC is switched off): 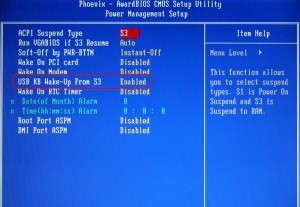 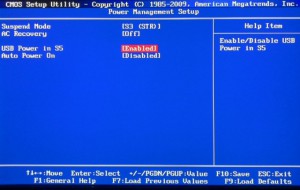 It’s also important to verify – in the HID device properties – that the option allow this device to wake the computer is selected:

The sketch for Arduino is available in my Github repository.

For Arduino to be able to send the wake signal to the PC, you have to replace the USB library shipped with the IDE with the one modified by Mike T and available on the official forum.

The zip file (also available on my website) contains 4 files, that must be placed (overwriting the existing ones) in \hardware\arduino\avr\cores\arduino (within the main folder where you installed the IDE).

I verified the compatibility between this modified version of the USB library and the latest version of the IDE (1.6.3) at the moment I’m writing. Please remember to always backup the original files.

The sketch leverages also the RTCLib library from Adafruit to read data from the RTC module: you can use the new Library Manager to install it in your IDE.

WakeMeUP implements two simple commands you can send through the serial monitor: 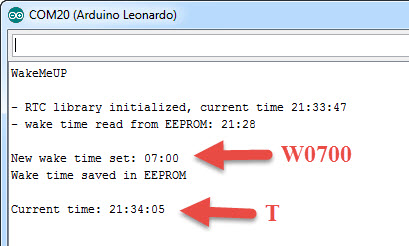 The modified USB library allows to send the wake signal with just a line of code: