In the previous blog post, I explained how to install the official development framework (Espressif IoT Development Framework) and how to use it to compile your first example, Hello world.

Even if you can write your programs with a simple text editor (on Windows I always suggest to use the opensource Notepad++), it’s very easier to do it with an IDE (Integrated Development Environment), that is a graphical application which you can use to write the code (it often includes syntax highlighting and auto-completion), to compile it and to upload the binary on you development board. Among the available IDEs, one of the most famous and adopted is without doubts Eclipse.

Eclipse installation is really straightforward: connect to the official site and download Eclipse IDE for C/C++ Developers for your operating system (as in the previous post, I decided to use Windows):

Eclipse is shipped as a zip archive. When the download is complete, unzip the archive in a folder of your hard drive. To make it easy, I chose the same folder (the user’s home folder) where I’ve already installed the esp-idf:

Run Eclipse with a double-click on eclipse.exe. At first, you are prompted to specify the path of your workspace (= the folder where your projects will be saved in). I chose to create the workspace as a subfolder of Eclipse’s installation folder:

To be able to develop a project based on esp-idf with Eclipse, you need to do some configuration. First, import the project in the IDE. For this tutorial, I’m going to use the 01_hello_world example; in a future post I’ll show you how to start with an empty project.

Give the project a name, choose the folder that contains the code and make sure that the selected toolchain isCross GCC: 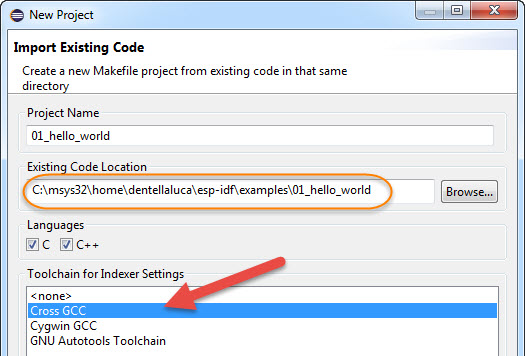 When the import is complete, open the project Properties: 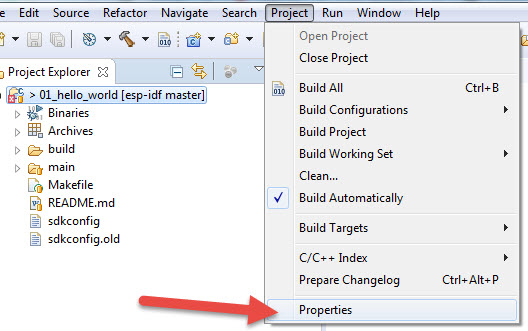 On Windows, in addition, change the PATH variable with the following value (if msys32 is installed in the default path):

The final step is to choose C/C++ General – Preprocessor Include Paths and open the Providers tab.

Then click on CDT GCC Build Output Parser and add xtensa-esp32-elf- at the beginning of the command:

It may happens that, after the compile process, Eclipse warns about some “unresolved inclusion”:

The warnings should appear only under Windows and they are caused by a known bug that doesn’t block the compile process. You may solve it manually adding the different include folders found starting from the folder esp-idf/components in the project properties (C/C++ General – Paths and Symbols – GNU C):

You can also configure Eclipse to run the make flash command, to load the compiled version of your program on the development board.

Choose, on the right panel, the Build Targets tab:

Right-click on the project’s folder and choose New.

Type flash as target name, then confirm with Ok:

If now you right-click on the new command, you can start the flash process choosing Build Target: 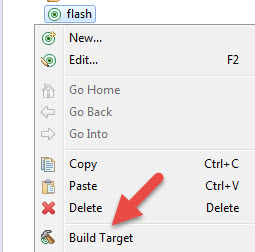 The Console tab, in the lower panel of the IDE, shows flash command output and result:

Hi, Luca!
Thanks for good tutorials!
I have learned many things about ESP32 from them.

How do you debug ESP32 in Eclipse IDE or CLI?

Hi Luca. Every time i create a new project,the settings disappear. Do i have to make those settings every new project?

hi, you can create an empty project and reuse it as a “template”

Hi Luca, my doubt is, what’s the exact difference between notepad and Eclipse?..

Can I develop programs with Notepad++?,

I’ve been working with the tutorial steps for using eclipse with the esp32, but I always get heaps and heaps.. and at least a couple of red lines in the code sometimes.. e.g

“portTICK_PERIOD_MS”, (in the hello world example)…

how will I know is the program is well made?

Hi! Of course you can develop your programs with the editor you prefer (Notepad++…). With Eclipse you can run the compile process within the editor, check the syntax etc. It may happen that you get red lines (= Eclipse can’t recognize that method) but you’re still able to compile and run the program, this is because of Eclipse and the compiler are different. Your problem can be related to some symbols not addded to the Editor. If you’re under Windows, try also the official guide.